A method of mirroring or striping data on clusters of low-end disk drives; data is copied onto multiple drives for faster throughput, error correction, fault tolerance and improved mean time between failures.

With the exception of RAID 0, all RAID levels provide automated recovery of data in the event of a disk failure. The RAID levels and their key features are:

• RAID-0 — provides disk striping without parity information; data is written by segment across multiple disks sequentially until the end of the array is reached, and then writing starts at the beginning again. Provides greater logical disk capacity with faster access time on reads (multiple segments read simultaneously). However, RAID-0 provides no data redundancy — if one drive fails, the entire disk array subsystem is unavailable.

• RAID-1 — provides fault tolerance by using disk mirroring (also called shadowing). Each byte of data on a disk is duplicated on another physical drive, providing 100% data redundancy. RAID-1 provides immediate access to data when either the primary or secondary drive fails, but it has the highest cost of all RAID types, since duplicate hardware is required.

• RAID-2 — eliminates the 100% redundancy overhead of RAID-1 by using a powerful error detection and correction code (Hamming), with bits of the data pattern written across multiple disks.

• RAID-3 — similar to RAID-2, but uses a single check disk per group that contains the bit parity of the data disks; data is interleaved across all disks. Because disk reads are performed across the entire array and all data is transferred to the controller in parallel, RAID-3 is well suited for applications that require high data read/write transfer rates for large sequential files.

• RAID-4 — instead of interleaving blocks of data across all drives, writes the first block on drive 1, the second block on drive 2, and so on. This technique dramatically improves read time, since many reads are single block (single drive), freeing other drives for additional read requests.

• RAID-5 — eliminates the dedicated parity drive by writing parity with the data across all drives in the array. Consequently, the single-write restriction and some performance degradation of RAID-1 through RAID-4 are eliminated. If a drive fails, the controller can rebuild the data from the parity and data on the remaining drives.

• RAID-6 — provides two-disk parity and one spare, so that two simultaneous disk failures per array of disks can be tolerated. With the occurrence of a failure, a spare is brought online and transparent reconstruction begins automatically in the background with negligible impact on performance.

• RAID-10 — a combination of RAID-0 and RAID-1 that provides the benefits of striping and fault tolerance (disk mirroring).

Woffice comes with several built-in demos that you can install in one single click. You can test the available demos here and feel free to challenge any presented feature. 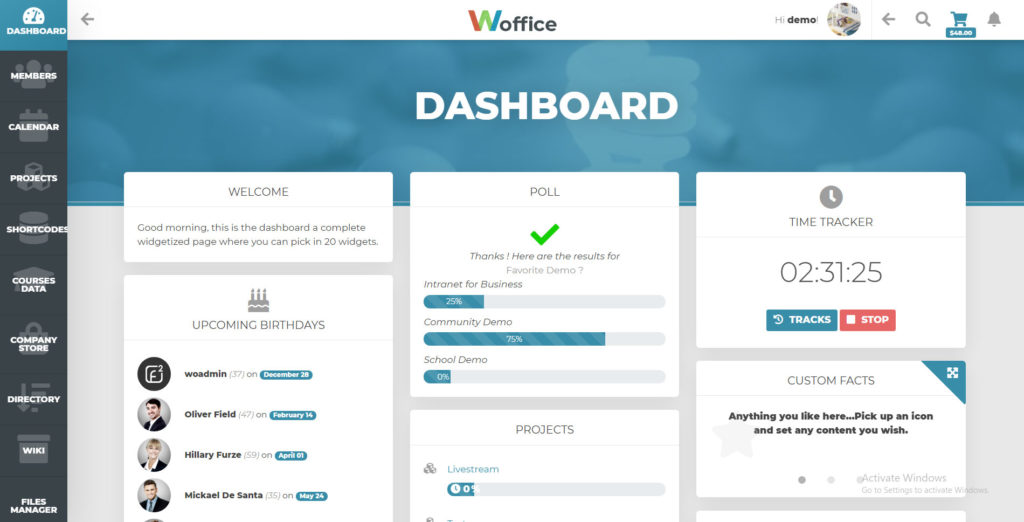 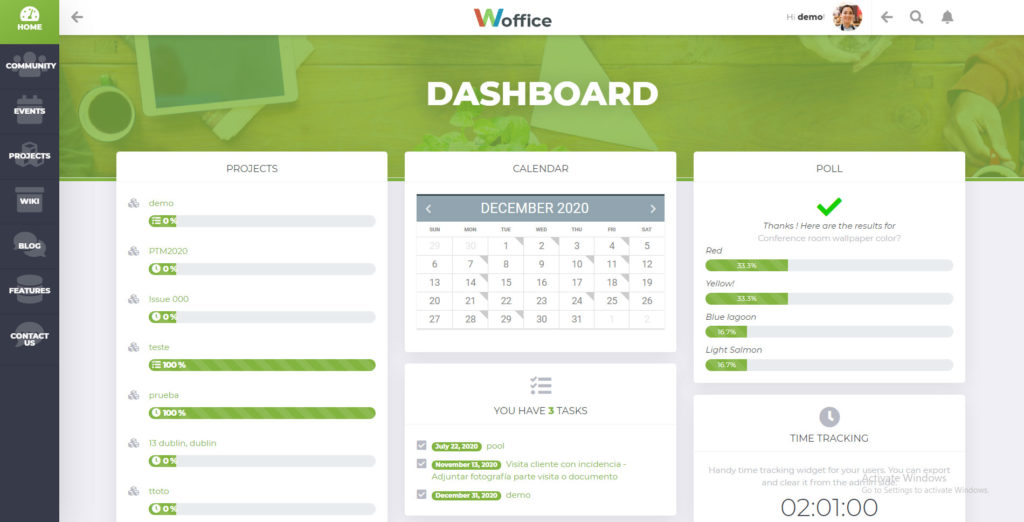